Marking World Toilet Day 2018, Municipalities Association of Nepal (MuAN) in collaboration with United Cities Local Governments Asia Pacific (UCLG ASPAC) has signed its first Memorandum of Understanding (MoU) with Lahan Municipality in south-eastern Nepal under its “Municipalities Network Advocacy in Sanitation in South Asia”. The project, among others, focusses on capacity building, implementing national policy and strategy on sanitation with focus on Fecal Sludge Management (FSM) and non-sewered sanitation system in line with SDG 6, as well as conduct a feasibility study to develop a sustainable detailed project planning and action plan that improves accessibility on financial option through different funding mechanism such as public-private partnership, cooperation with banks and development agencies and communities.

Lahan Municipality in Province Two of south-eastern Nepal in one among total 10 pilot Municipalities (with five in each country) in the network in Nepal and Bangladesh that the project is going to cover. In Nepal, the five municipalities were chosen based upon a rapid sanitation assessment of 42 Municipalities using KOBOCollect Application for data collection. Among the 42 Municipalities surveyed upon, at least 52 percent already have expressed their commitment to develop their own FSM facility in the future. Though only top five (with Lahan Municipality being one) have been chosen for the pilot phase of the project, it is most likely that the model can be replicated in other Municipalities with access to proper funding mechanisms.

“It is an honor that Lahan Municipality that too from Province Two was chosen to kick-off the project with a MoU marking World Toilet Day,” said Muni Sah Sudi, Mayor of Lahan Muniucipality during the MoU signing ceremony in Lahan Municipality Office Hall. “We eagerly look forward to network with other municipalities because sanitation is now turning into a challenge as it is also directly related to public health and other issues such as girls’ education and so on.”

Likewise, MuAN President as well as Mayor of Dhulikhel Municipality, Ashok Kumar Byanju Shrestha, highlighted the need for a national-level as well as international level commitment to jointly address the rising problems of sanitation in rapidly growing cities.

At the same event, Lahan Municipality’s Spokesperson and Chairperson of its Ward II, Raj Kumar Sah, made the welcome address while MuAN’s Sanitation Advocacy Specialist, Er. Muskan Shrestha, gave an overview of the project. MuAN’s Executive Director, Kalanidhi Devkota, emphasized the need for municipalities to take up the issue of sanitation more seriously as it is directly related to public health.

MuAN is the implementing partner in Nepal under UCLG ASPAC’s “Municipalities Network Advocacy in Sanitation in South Asia” with Environment & Public Health Organization (ENPHO) as its technical partner. In Bangladesh, the same UCLG ASPAC project is being implemented by Municipalities Association of Bangladesh (MAB) with SNV as its technical partner. 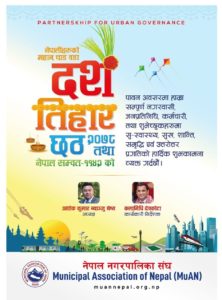